ElvalHalcor was awarded as one of the most dynamic and particularly export-oriented Greek companies in the Annual Forum of Business Excellence for Outward-Looking Greece, “Creative Greece Awards 2019”, which was held on Thursday, April 4th, at the Athens Hilton hotel.

The event “Creative Greece 2019”, which was organized by New Times Publishing, under the auspices of the Ministry of Environment and Energy, the Hellenic Federation of Enterprises (SEV), the Hellenic Federation of Northern Greece Enterprises (SVE) and other Industrial and export bodies, a number of executives from the most dynamic companies, state representatives and members attended by sending a resounding message of optimism, as the extroversion of Greek businesses is growing significantly. 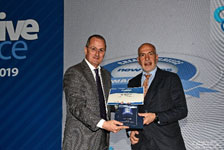 ElvalHalcor is an important player in the non-ferrous metals industry, with global presence and high expertise in the aluminium and copper segments. ElvalHalcor’s success is derived from its commercial export orientation, customer-focused philosophy and innovation which comes through continuous investment in research and development (R&D).

The extroverted identity and intense export orientation that distinguish ElvalHalcor, greatly differentiate it from the developments in the Greek market. In the financial year 2018, ElvalHalcor's sales to non-Greek markets accounted for 80.5% of turnover. In addition, ElvalHalcor demonstrates impressive figures, as it has invested more than Euro 440 million over the last decade, once again this managed to increase employment by 7.7%, to export Euro 1.9 billion and to create approximately Euro 1.5 billion of direct 'social product'.

About ElvalHalcor:
ElvalHalcor S.A. Hellenic Copper and Aluminium Industry is a leading global industrial producer of aluminium and copper products. The Company was formed in December 2017 via a merger by absorption of Elval Hellenic Aluminium Industry S.A, a leading international aluminium rolling company, by Halcor Metal Works S.A., the largest copper tubes producer in Europe. For more information about the Company, please visit our website at www.elvalhalcor.com.