In the presence of the Prime Minister Mr. Kyriakos Mitsotakis, a presentation event was held for the new innovative four stand TANDEM aluminum hot rolling mill on Wednesday, July 15, at ELVAL’s premises in Oinofyta. This new strategic investment of ELVAL (the aluminum rolling division of ELVALHALCOR) in the most modern hot rolling mechanical equipment in the world today, places the Greek aluminum industry at the very forefront of the industry globally.

The investment amounting to 150 million euro positions ELVAL as the second aluminum rolling factory in Europe,  in terms of hot rolling capacity, which, combined with additional investments spanning the next five years, are expected to triple ELVAL’s production capacity. This crucial investment also paves the way for new, more demanding markets, such as the automotive and aerospace industries. At the same time, it significantly enhances the factory’s energy efficiency, reducing specific energy consumption and total carbon footprint, contributes to saving valuable resources and time, while also optimizes the metallurgical process as a whole. We are very proud to share this new innovative milestone as the TANDEM investment marks a new era for ELVAL, bringing with it immediate and significant benefits for the national economy and society as a whole.

With the slogan "A Greece that produces is a Greece that exports", the Prime Minister Mr. Kyriakos Mitsotakis began his speech at yesterday's presentation of ELVAL’s new four stand TANDEM aluminum hot finishing mill, pointing out that the rebirth of Greek industry is viewed as the top priority for the government. ELVAL’s investment, he pointed out, is an emblematic example of how the circular economy works in practice, which is a priority in the government's development plan, whilst also announcing the reduction of the Special Consumption Tax for industries powered by the medium voltage network. ELVAL is an invisible pillar of Greece's heavy industry, but it is a world-renowned company and a leading export company, the Prime Minister said in his speech, stressing at the same time that, "It simply isn’t true that Greece does not even produce a pin. ELVAL proves this point; it is a pioneer in aluminum processing. And along with ELVALHALCOR, a pioneer in an industry with a long past, there are even greater future prospects.” In addition, he underlined the fact that the investment’s completion took place during a period of uncertainty due to the coronavirus pandemic and that it is an addition to the positive developments witnessed in the country in the last few weeks. In closing his speech, the Prime Minister wished the Company's Management all the best for the new investment, adding that: "The upgraded aluminum rolling mill should become ELVAL’s launch spring, and should also be viewed as a springboard for an industrial renaissance throughout the country".

In his speech, executive member of the Board of Viohalco Michael Stasinopoulos noted that ELVAL has been constantly modernizing and progressing since its inception, and that the new investment places ELVAL amongst the leading aluminum producers worldwide. He pointed out that “the investment is a practical response to those that question whether the country has the ability to have a modern industry in place, one that does not need crutches but an industrial policy that provides a sound basis for growth.” Mr. Stasinopoulos stressed how important competitive energy costs are for industrial companies and the importance of establishing an open energy market so as to further enable the transition to renewable energy sources. The plan after TANDEM is an ambitious one aimed at fully utilizing the international dynamics in increasing the use of aluminum, he stated characteristically, pointing out that aluminum will play a leading role in the new green economy. At the same time, he underlined that with the increase in production which will be brought about by the TANDEM investment, additional investments in aluminum recycling have been planned, the completion of which will create approximately 400 new jobs. Concluding his speech, Michael Stasinopoulos said: “ELVAL's new investment has all the prerequisites to offer creative and exciting careers for scientists and professionals, to become a hub for collaboration with universities, to bring young people back to Greece from overseas, and to become a model for the modern meaning of corporate social responsibility, where companies develop and progress together and in parallel with the societies in which they operate".

Lambros Varouchas, ELVAL’s Managing Director, presented a brief historical overview of the successful course of the company which has 45 years of experience in the aluminum rolling industry, proudly stating that: “ELVAL is rising to the top of the industry thanks to its investment strategy and more importantly, due to its talented, specialized and constantly evolving human resources”. The new TANDEM hot rolling mill that we present to you today is of the highest technology and it is the most modern in the world in terms of hot rolling equipment. In Europe, only three factories have a four stand hot rolling mill, but what we have installed is the most powerful and the most contemporary of its type”, said Mr. Varouchas. Concluding his speech, he emotionally stated: “All of us at ELVAL feel proud to be part of this highly pioneering and world-class company as well as contributors to its dynamic development.” 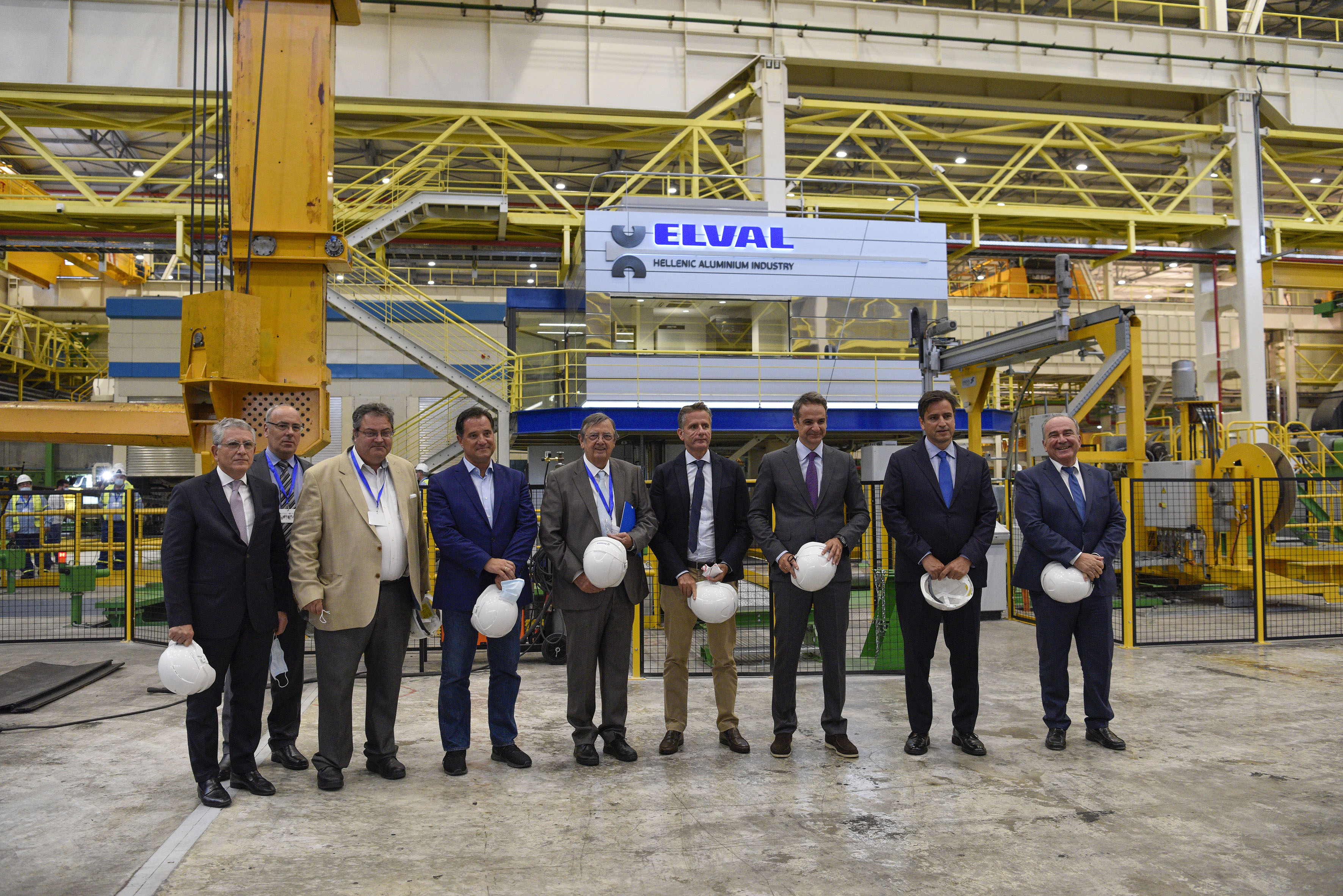 Elval is the aluminium rolling division of ElvalHalcor S.A., one of the leading aluminium rolling manufacturers worldwide and the only one in Greece. For almost 50 years, Elval has been recognised as a trusted partner and innovative aluminium manufacturer, with a broad portfolio of quality products for the packaging, construction, shipbuilding, automotive, energy, industrial and HVAC&R markets. Through an established global commercial network across 21 countries, Elval exports approximately 80% of its production to more than 60 countries and offers reliable and competitive solutions that meet the requirements of the most demanding global customers. For more information about Elval, please visit the website www.elval.com