Copper Destroys Viruses and Bacteria. Why Isn’t It Everywhere? 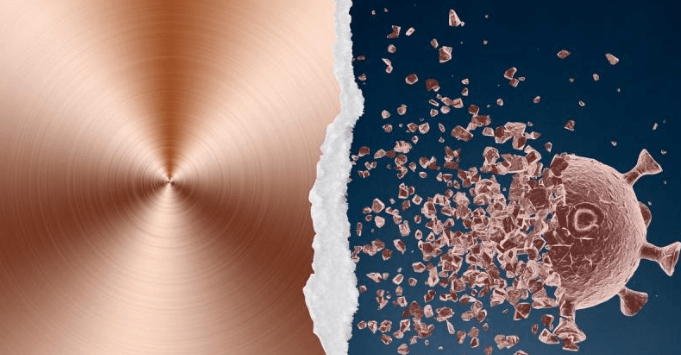 It could destroy norovirus, MRSA, virulent strains of E. Coli, and coronaviruses—including the novel strain currently causing the COVID-19 pandemic.

Ιn 1852, physician Victor Burq visited a copper smelter in Paris's 3rd arrondissement, where they used heat and chemicals to extract the reddish-brown metal. It was a dirty and dangerous job. Burq found the facility to be "in poor condition," along with the housing and the hygiene of the smelters. Normally, their mortality rates were "pitiful," he observed.Yet, the 200 employees who worked there had all been spared from cholera outbreaks that hit the city in 1832, 1849, and 1852. When Burq learned that 400 to 500 copper workers on the same street had also mysteriously dodged cholera, he concluded that something about their professions—and copper—had made them immune to the highly infectious disease. He launched a detailed investigation into other people who worked with copper, in Paris and cities around the world.

In the 1854 to 1855 cholera epidemic, Burq could not find any deaths of jewellers, goldsmiths, boilermakers—all those who worked with copper. In people in the army, he found that musicians who played brass instruments (brass is partly copper) were also protected.

In the 1865 Paris epidemic, 6,176 people died of cholera, out of a population of 1,677,000 people—that’s 3.7 people out of every 1,000. But of the 30,000 who worked in different copper industries, only 45 died—an average of around 0.5 per 1,000.After visiting 400 different businesses and factories in Paris, all of which used copper, and collecting reports from England, Sweden, and Russia on more than 200,000 people, he concluded to the French Academies of Science and Medicine in 1867 that “copper or its alloys, brass and bronze, applied literally and pregnantly to the skin in the cholera epidemic are effective means of prevention which should not be neglected.”

Today, we have insight into why a person handling copper day in and day out would have protection from a bacterial threat: Copper is antimicrobial. It kills bacteria and viruses, sometimes within minutes. In the 19th century, exposure to copper would have been an early version of constantly sanitizing one's hands.Since then, studies have shown that copper is able to destroy the microbes that most threaten our lives. It has been shown to kill a long list of microbes, including norovirus, MRSA, a staph bacteria that has become resistant to antibiotics, virulent strains of E. Coli that cause food-borne illness, and coronaviruses—including the novel strain currently causing the COVID-19 pandemic.If copper were more frequently used in hospitals, where 1 in 31 people get healthcare-acquired infections (HAI), or in high-traffic areas, where many people touch surfaces teeming with microbial life—it could play an invaluable role in public health, said Michael Schmidt, a professor of microbiology and immunology at the Medical University of South Carolina, who studies copper. And yet, it is woefully absent from our public spaces, healthcare settings, and homes.

“What happened is our own arrogance and our love of plastic and other materials took over,” Schmidt said of the cheaper products more frequently used. “We moved away from copper beds, copper railings, and copper door knobs to stainless steel, plastic, and aluminum.”